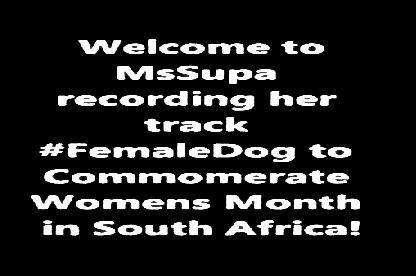 Ayanda Ngidi has always been a performer. From organising singing contests at the age of 8 just so she can win singing Brenda Fassie’s “It’s a wedding day”. The young girl always had the love for stage and entertainment.
MsSupa* started her journey with Hip Hop and Music since the young age of 13. This was when South Africa was just getting introduced to Hip Hop. At 1st she enjoyed the music but always assumed it was for Males. It wasn’t until she heard Foxy Brown’s 1stmajor single “Gotta get you home” that she realised that “girls can do it too”. So the 13 year old girl went to scribble her 1st rhyme. From then on she could not be stopped. Always penning thoughts, at times mimicking the females that were prominent at the time. Lil’Kim, Foxy Brown, Queen Latifah, MC Lyte and the like. She eventually found her voice and flow at 16. Most remember her as the only female at “pscyphers” throughout her high school years. She never seemed discouraged by being the only female, instead it helped her to hold her on.
After high school she moved to Pretoria too study. It was there that she met other like minded peers. She went to record her 1st song at Toxic Soul Music in Pretoria and rubbed shoulders with the MC’s in the Capital City such as RAS, Nveigh, BlackLes, Flex Boogie, Onderground to name a few. She started performing at some of the biggest gigs in Pretoria. Going on to submit her songs for SA’s only Hip Hop magazine, Hype Magazine, for their mixtape. It was there that the editor saw more in the artist and an opportunity to highlight females in Hip Hop. That was when she was selected to become the 1st lady to be on the cover of Hype Magazine. The article covered MsSupa, Tumi (a female DJ) and Relo who was the lead vocalist for Skwatta Kamp.
Since then she has performed at gigs in Pretoria and Jo'burg including the Smirnoff Hype Sessions Launch. With no recording label backing her she's doing things on her own. She finally dropped her EP The Complete Puzzle in August in line with Womens Month. In 2007 she got the Number one spot on Rhyme and Reason on Metro Fm .
She has held her own at major events and constantly aims at making Hip Hop and music for all ears. Her many achievements include being featured on HHP’s Dumela album.
This lady has also done work for TV and Radio. She had was a freelance DJ on Joburg’s No1 Hit Music Station (94.7) for 2 years. She has also featured on the award winning Yizo Yizo.
MsSupa* is a multi dimensional entertainer who has only just starte