BLITZ THE AMBASSADOR On Afrihooop 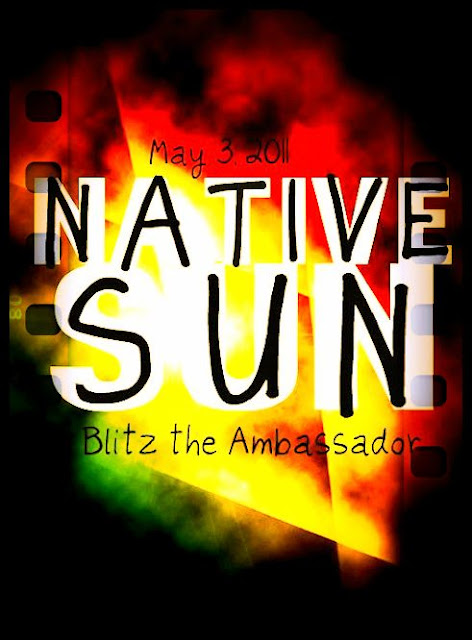 Biografía
Born and raised in Accra, Ghana, Blitz the Ambassador grew up to the sounds of Afro-Beat, Highlife, Jazz, and Motown. But when his older brother introduced him to Public Enemy’s classic album, It Takes A Nation of Millions to Hold Us Back, as a young boy, he was changed forever. “I had never heard young Black people express themselves in that way before,” recalls Blitz.

After moving to the U.S. to attend college, Blitz continued to hone his musical skills, releasing several mixtapes as an undergrad at Kent State University. After graduation, Blitz moved to New York City to pursue his dream. In NYC, Blitz began to record, Stereotype, a live-instrument-heavy musical exploration, that tests the limits of Hip Hop. Drawing from his diverse musical background, he dove into the project with explicit intent of changing Hip Hop forever. In order to achieve the live sound he was looking for, he formed a band, The Embassy Ensemble, and brushed off his own djembe skills.


After three long years of recording, Blitz took the album to several major labels. Getting the major label run around one to many times, Blitz decided go it alone.

“One day I just said, ‘Fuck it’,” recounts Blitz. “I was tired of record labels telling me I had to be like somebody else. So I came home and wrote, Rememebering the Future,” Blitz explains. This epic, instrument-laden, track illustrates Blitz’ refusal to be a Stereotypical rapper. The chorus of the song is, ‘I am who I am / and you can never change me / Reaching for the sun / remembering the future.’

Now, his label, Embassy MVMT is proving that Hip Hop fans are ready for the future. Hungry for a change, and sick-and-tired of the juvenile radio hits, Blitz the Ambassador is here to give the people what they want.


Blitz the Ambassador Brings the Pan-African Noise with Native Sun

A blindingly bright clarity drives Blitz the Ambassador. With a spot-on sense of flow, he name-checks Basquiat and Lumumba, evokes lovelorn sighs on Accra buses, émigré alienation, history’s shadows. All set to swirls of brass, distorted guitars, and the crackle and pop of old amplifiers.

With a lightning-fast mind, the political boldness of Chuck D, and the sixth groove sense of Fela Kuti, the Ghanaian-born, New York-based MC, composer, and producer unleashes psychedelic Afrobeat colors and triple-time rhymes on Native Sun (Embassy MVMT; May 3, 2011). The album was sparked in Accra yet forged in the African diaspora.

Native Sun—as both musical journey and a striking short film—unfolds from a kaleidoscope of perspectives, with help from a Rwandan sweet soul singer (Corneille on the track “Best I Can”), from sleek Francophone sirens (Les Nubians on “Dear Africa”) and from Congolese and Brazilian samba-loving MCs (Baloji and BNegão on “Wahala”). Blitz even got a boost—including an invite to play at a packed Central Park SummerStage show—from Public Enemy’s Afrocentric thinker and rapper Chuck D himself (whose shout outs grace “Oracle”).

Blitz grew up when the fierce promise of Afrocentric, intellectually discerning rap was at its peak. In the Accra of his youth, the golden age of hip hop lived on long after rap began to go (Dirty) South in the U.S. In barbershops and on well-loved cassettes, young people rallied around a fresh and defiant expression of their concerns and perspectives.

“When you hear young people have such a command, speaking so assertively about how they feel, it resonates with you no matter where you are,” reflects Blitz. “Especially if you live in a stricter society with strong social codes where young people’s voices aren’t heard, hip hop can be a major outlet.”

Blitz and his brothers and friends became avid fans of groups like Public Enemy, one of the few major hip hop names to tour Ghana. Blitz began memorizing raps verbatim to impress the cool kids at school, making up words where he didn’t catch the lyrics, studying the flow of masters from Rakim to KRS-One.

Yet Blitz was surrounded by a profusion of other music in Accra, from the highlife swaying at a nearby soccer field to the kora and drums played for chiefs and sub-chiefs. Marvin Gaye and Michael Jackson, and local reactions to rock and funk all made their mark, spinning on the sometime unreliable family record player.

It all came together, resounding in his head after Blitz left home and began to feel his way toward his own voice and sound. He figured out how to launch a blazing rap in 6/8, a favorite Afropop time signature heard on the track “En-trance,” or effortlessly blend the beauties of scratching with hardcore interlocking melodies (“Akwaaba” and “Victory”). He shifts between Twi, West African Pigeon, and English, between good old R&B and Ethiopian funk jazz (“Native Sun”), without losing a beat.

Refracted by life in the diaspora, the sounds Blitz became increasingly drawn to—starting on mixtapes in college and continuing with his live instrumental hip hop outfit Stereotype—crashed up against the commercial reality of what his favorite music had become.

With the DIY skills of hip hop’s old-school outer-borough instigators and decades of lo-fi innovators across West Africa, Blitz crafts his tracks from scratch, singing reference tracks for every trombone and background vocal, often laying down thirty or more lines for each song. “I don’t have any music theory training. I have no idea what I’m doing,” Blitz laughs. “That means I do things that a trained composer would never do. That’s when it gets interesting.”

This “outsider thinking” also led Blitz to make a short film with director Terence Nance as a companion expression for the album, a shorter take on the larger whole that Blitz fears might get lost in the IPod shuffle. Filmed in Ghana with a cast of 55, it maps the transformation of a boy from marginal village orphan to master of his destiny, with a poignancy and panache rarely seen in music videos.

“Native Sun the album is a journey backwards, back through hip hop, the Caribbean soundsystem culture that preceded it, back to its African roots, with the final kora,” notes Blitz. “The film looks forward, to what could be. Both are about the longing for home we feel in the diaspora, and about letting go of old notions and embracing new ideas. The sound in itself speaks to that.”


iTunes (US) : http://itunes.apple.com/us/preorder/native-sun
iTunes (EU) : http://itunes.apple.com/preorder/native-sun-exclusive-version
Native Sun, Blitz the Ambassador's second studio album, is a mix of highlife, afrobeat, and hip hop. Born and raised in Accra, Ghana, Blitz and his band, the Embassy Ensemble, bring a new sound to international music. Native Sun, will be released May 3rd in North America, and May 6th Worldwide.

Album Produced by Blitz the Ambassador and Optiks