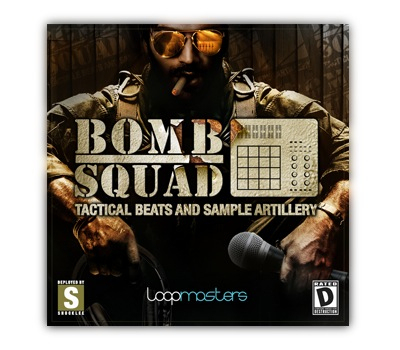 BOMB SQUAD: Tactical Beats And Sample Artillery contains a massive array of over 1GB of original BOMB SQUAD audio samples exclusively sound designed and engineered by Hank Shocklee for Loopmasters. Sampling in music is now a part of the mainstream culture and Hank Shocklee  is responsible for bringing the art of sampling to the forefront by creating techniques such as filtering, multiband micro-loop sampling, introducing the use of sine waves to create kick drums and bass lines, truncating and mapping samples on keyboards and drum machines and using tuning to create warping in the late 80's–early 90's. With Shocklee's creation of the group Public Enemy and his Bomb Squad production unit these techniques were introduced to the world stage via his landmark albums with Public Enemy such as "It Takes A Nation of Millions To Hold Us Back" and "Fear Of A Black Planet", two albums which consistently rank high amongst most of the 'greatest albums of all time' lists such as those by Rolling Stone, Spin, Pitchfork, VH1, Vibe, Mojo, NME, The Village Voice and many others.
Shocklee's name became synonymous with sampling shortly after creating the BOMB SQUAD style. He has been at the centre-point of debates on copyright laws and studied by pop culture historians and academics alike. As a constant developer of numerous audio production and sampling techniques, he has been both an inspiring force for music producers and a disruptor of music industry politics.
This sample pack weighs in at just over 1GB, and includes 723 24 Bit samples including  440 loops and 280 Single samples. Also included in this unique pack are 80 ready to play patches for Reason NNXT, Halion, EXS, SFZ and Kontakt soft samplers.  Reason Refill, Apple Loops, and Ableton Live versions are also available to purchase separately.
Genres: Artist Series, Grime, Hip-Hop, Techno, Dubstep, Cinematic , Breaks and Urban