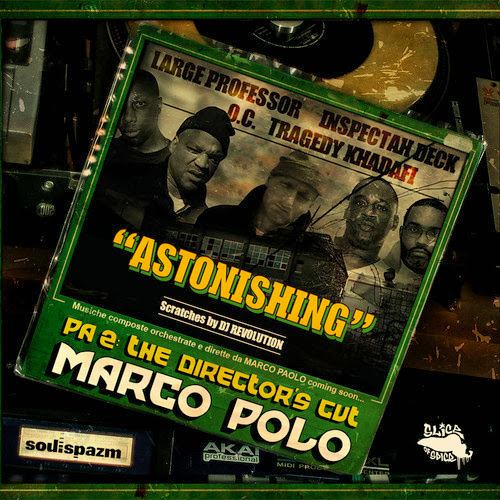 "This shit is called Astonishing for a reason. Enjoy. PA2 coming soon."
Marco Polo.
It’s been six years since Marco Polo took the hip-hop world by storm with his Rawkus/Soulspazm Records debut LP, Port Authority. This album not only established the Toronto, Canada native as one of the top emerging producers in his field, but also transformed Marco into a very sought-after collaborator as well. He has since gone on to release the collaborative project with Torae, Double Barrel, in 2009 and has also worked with acclaimed artists such as; Masta Ace, Special Teamz, Heltah Skeltah, Buckshot, KRS-One, Talib Kweli, Pharoahe Monch, Sean Price, Copywrite, Vinnie Paz and Large Professor.
After generating tremendous momentum this summer with his free LP, Newport Authority 2, Marco Polo returns to offer up the highly anticipated sequel, PA2: The Director’s Cut, which is the culmination of thousands of hours of creative energy, manpower, crate-digging, knob-twisting, Newport-smoking and coffee-bingeing, to create an impeccable infrastructure of music that will resonate with hip-hop fans across the world.
Fans have already heard glimpses of what MP has in store for PA2: The Director’s Cut, as his heartfelt dedication to Gang Starr’s Guru (“G.U.R.U.” featuring Talib Kweli & DJ Premier) not only went viral in a day, but also clearly resonated with the late MC’s friends and family as they offered up their support for the track. The LP’s most recent leak, “3-O-Clock” did what hip-hop fans have been impatiently waiting on for over fifteen years; reuniting Organized Konfusion (Pharoahe Monch and Prince Po) on the same track. Official music videos for these tracks will be released in the weeks leading up to the album. The “G.U.R.U.” video is a nostalgic tribute to the legendary lyricist, directed by Todd Angkasuwan, while “3-O-Clock”, directed by The Doppelgangaz, effectively captures the grimy and gritty New York vibe on this MP x OK collabo.
PA2: The Director’s Cut is not a “compilation” project. Rather, much like projects from the producers (Jay Dee, Pete Rock, DJ Premier, etc), that have influenced Marco, it’s a seamlessly blended piece of art featuring a who’s-who of the industry’s top MCs; each track crafted and specialized to fit each MC’s strengths. This is evident throughout PA2. On “West Coast Love” Marco displays his versatility, cooking up some premo G-Funk for West Coast legends MC Eiht and King Tee to spread their Cali love on. Further, “Astonishing” featuring Large Professor, Inspectah Deck, O.C. and Tragedy is like riding shotgun to “The Tunnel” in Doc Brown’s DeLoreon, and the shimmering “Strange Brew” with Gangrene (Alchemist & Oh No) pushes the BPMs to maximum levels. The LP’s apt closing track, “Glory” (Finish Hard) featuring Masta Ace, A.G. and Posdnuos (of De La Soul) offers up a hilarious commentary from Ace on Marco’s tedious “work ethic” and ends with commentary from everyone’s favorite beer-drinking Canucks Bob and Doug McKenzie (of Strange Brew fame) who revisit their “Strange Brew” days.
For nearly 10 years, Marco’s mission has remained the same: to keep the masses moving and their heads bobbing, and PA2: The Director’s Cut is a shining testament to that. “I put together an album that I felt picked up where Port Authority left off but updated it for 2013. I'm proud to finally let this album out into the world. It's a long-ass album and I don't give a flying #!@*. At the end of the day I'm excited with the finished product; which took me five-plus years to create. DJ connoisseurs can also expect some of finest-quality cutting courtesy of DJ Revolution, DJ Premier, Shylow, DJ Linx & DJ Romes. Moving forward, I'm seriously looking forward to touring this record and smacking them MP pads live for all those inviting me to do so. Catch me traveling the world again soon backing my big bro Masta Ace, as well as rocking some solo production sets for the hip-hop heads.” Marco states.
twitter.com/marcopolobeats
www.facebook.com/MarcoPoloBeatsPA
www.soundcloud.com/MarcoPoloBeatsPAhttp://instagram.com/MarcoPoloBeats
www.soulspazm.com
www.slice-of-spice.com