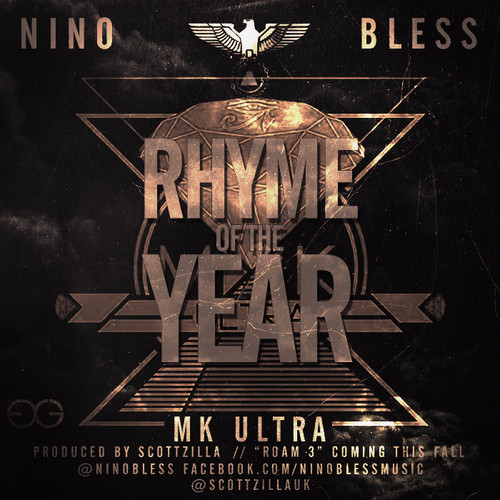 Nino Bless "Rhyme Of The Year" (MK Ultra) via http://hiphopdependency.com

I’ll break down how this song happened on my tumblr page tomorrow.
I will say this .. a lot of it was “subconciously guided”

R.A. Thorburn is directing the video for "Rhyme Of The Year". Check his vids on youtube and the joint he just did for Talib Kweli. Its an honor to have his creative input on a record like this. More vids to come as well. http://ninoblessmusic.bandcamp.com/track/nino-bless-rhyme-of-the-year-mk-ultra

All support towards this song on my bandcamp will go towards the visual, every last penny so thank you to all who sent me extra than what I asked for. I love you guys .. so much more music & exciting news to come. Hard work truly pays off ...


Wrote this to make a statement and I was wrong on this song about 1 thing .. this will define my legacy. Thank you fans for appreciating this. If you care to show support it will only help with me delivering full content from my home studio. Charging a penny a bar. 1.32 .. support, listen, bootleg, stream don't care. Just spread the word.

Raise up ya glasses
Lets toast to whoever's brave enough to throw this in the face of the masses
Has the wave past yet?
I ain't tryna be y'all Cassius...
You know…? The greatest but brace for semantics
To he who's important like the Pope
I'm Constantine establishing Catholicism & changing the Sabbath
If Rap's the Vatican
I ain't no Seventh-day Adventist
I just know Satan's tactics are blatant and Fascist
Is there a moral code written.. that's unforced?
Fuck all religions
Pardon this y'all all unwitted
Y'all real as stones that created the Mormonism pages
I've morphed into Morpheus' pick the Oracle gave him

'Pac from heaven is running this rap shit
Hova's Jewish investors are running this rap shit
T.D.E is running this rap shit
Their brother dropped the bait, all these rappers done grabbed it
Snap! Bit! Look how these acts fish for a casting
A song drops, next minute it's considered a classic
I missed my homie Budden, I'm glad he released that track
And kicked that thick model right off his mattress
Hit the booth
Now it's only right we going at this
The fans now wanna hear bars so why be passive?
This is a bomb Flex won't drop, I KILLED this mic
But I ain't out taking flicks in a kilt for hype!

It took a Compton Kid to call himself the King for Heads to sense the heat
Before that, New York was asleep while rocking to French's beats
I'ma address this, my legacy ain't defined by this though
I acknowledge this, but here I'll play a prominent role
On the road to riches, that's word to the bullets that took Biggie
My city's non-believers, just seen a memento mori
Look at'em yell & scream trying to outshine my glory
WHAT?
I can't hear you brother, Trayvon's side of the story
Everybody see what they just wanna see.. yeah
People only want the truth that they just wanna hear.. yuh
Call me out and we battling pronto
I'll be at King Of The Dot with Drake, "5AM In Toronto"
I like when homie said everything's Drake featuring Drake
But all I'm hearing these days is Fake featuring Fake
All their artwork be looking like Shake featuring Shake
When I body a beat, that leads to great featuring hate

I got a legion to take the keys to this gate
The way I'm beastin, Nas-mode when he made "Ether" for Jay
Bless is seasoned while teethin', his mentors would feed him a steak
A heathen, I'm Caesar the great without the features that's gay
My team's this game's Cesar Gracie
Flicking off this whole scene and we ain't caring what they saying
Aye… My tracks go like a chase from "Taken," I'm Liam
Trust me, blogs see'em even before I CC: 'em
I'm CC Sabathia, two-seam, I'm past ya
Genetically modified, my dreams of greener pasture
Too slow to grasp it?
A greener pasture, shit, genetically mod..(pshh)
Man, that just means I'm growing faster!

No diss, but if Cole World or Fab spit
My best rhyme, the whole world'll tilt off its axis
So just picture if Kendrick went and spat this
Some kids'll collapse, Twitter would crash quick
The Internet'll lag, while a massive asteroid'll land
Hit here and leave more than half of this damn planet.... famished
This is no exaggeration just imagination with facts
I'm strapped and aiming at the Masons 'til I'm famous off rap
Matter fact, fuck being famous
All I need in life's my pad, a pad
A few stacks to get around
A nice device, to lay tracks.. down
And a lil bad bitch whose ass stands out like the class clown
Hard knock school grad, peep my cap, gown
My stats, 0 back downs
Oh, that next one's a 'O' not a zero
For the circles I rap, 'round these drowned cats
They washed up should be on Eastbound & Down
I'm the beast around this town, you know me
I hung with Slaughter, before I even found the peak to my sound
Now, the reason I astound.. peeps with my style
Peep, they know with these bars that none should even reach for my crown

I got this game in an Iron Sheik
Camel Clutch, give up..
Or haters keep ya chin up
Went from only eating Ritz for dinner, to dinner at the Ritz
That line is ehh
But point is I'm winning with this shit
I am Big Pun, Eminem & Biggie when I spit
On a bit of Ritalin mixed with the pill from limitless
I'm Chino without the pecks, Nas when he had the chip
Kanye with the backpack, G. Rap without the lisp
I'm 2Pacalypse, but not for the populous
A Metropolis product, I'll chop every chart-topper to be modest
Hotter than hell is, I'm bout it, liver than any who's poppin'
You talkin' rhyming? Switch the topic- Bring up whatever:
Plaques, their pockets, their wallets
It's fact, so stop it, I'm inspired by knowledge
Honestly, this is prophecy jotted subconsciously-guided
I just provide light to sightless minorities
Write insight, a modern day Nastradamus & Socrates
I am in flight
The Wright Brothers, minus the bike
Defining new heights
While others with hype, are flying a kite
But I ain't alike
I'm raw, lion-like with a Tiger's stripes
That get defined the more I rhyme on the mic
I am Goliath
Dhalsim's, fire spit, Guile's kick
I am twice times the hit, of the finest piff
I am every rap grimy 90's hit

NO!
I am something prior, I'm the 49ers right before the 90's hit
Sire, Messiah type
Achoo! Bless you
I chew through comp while I Hoodoo-hex dudes
I do what I choose, my rules, chess moves
Mind you, I fight with my own mind- I'm Deadpool
My crew is next: Nino, 'Batta, Ness too
Haters? Hakuna Matata, we don't stress fools
Screw the Drama
I'm a, super Chupacabra
With a rude persona
Shut Up! I would boo Obama
I feud with karma
I'm gonna, get a huge house with a view for momma
& a room with a sauna
I should own a Jet, son
This future rhymer's stuck here
But my era's somewhere between The Jetsons & Futurama
I am proven, I'm a movement with honor
I am cruel, I'm the ruler, I am Luke & the father
You are truly misguided, I'm the fuse & igniter
You're a fool if you doubt it, you're a tool I'm MacGyver
I don't lose, I am Shield you are Hydra
I am Seal Team 6 on Osama, I'm a rider
I'm a lot of shit, a moderate, but folks can't define him
Homie I am on a conscious tip, but I am so un-Common
I am Kim Jong Un bombin' a nuke
Boosted & compounded with a comet, I'm a tyrant, I am Zeus
I'm that will and that feeling of surviving
When the odds were for you dying
I'm defiant, I'm religion, I am science
I am driven, I am grinding, I am grounded, I have risen...
I'm the sound of malnutrition & the cries of dying children
I'm the proudest victim.. in this toxic tired system
I'm the clock thats ticking down to ya expired existence

LIFE!
We're all boxed-in and trying to get, outside
And when I win I'll salvage it, with honor
in the name of Rakim I am locked in, I got this shit
Hak-Spit!
This here's proof the Loch Ness is not a myth
Never off guard!
Ya always ready when ya polished!
There's no need to turn a switch here like I'm Amish!
A product, walkin' the fine line between divine
And a psychotic mind you'd think DMT's in my chronic!
Demonic?