The Home Of Botswana Hip Hop By Elias Tebogo On eliasfm.co.bw 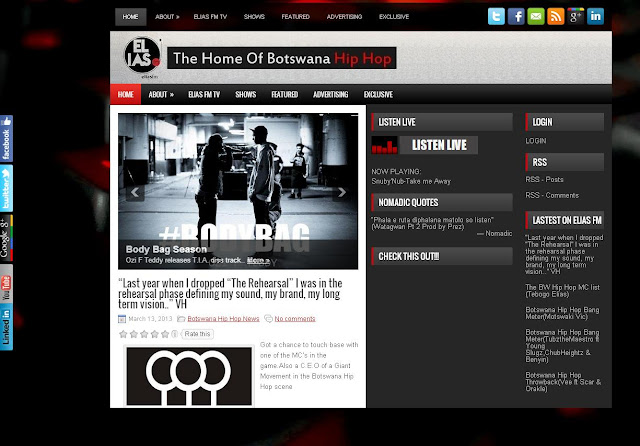 Born and raised in Francistown by Catherine Elias, Tebogo Elias grew up listening to kwaito mostly by Odirile Sento aka Vee and Eskimos. He then relocated to Selebi Phikwe at an early age but still visited his roots.

He finished his Junior School in Phatsimo Community (2003) and later on went to Selebi Phikwe Senior where completed his studies in (2005). He then went on further and did two years in University of Botswana as Bachelor of Science student in 2006.

In 2009 he relocated to Canada for further studies to study Mineral Processing Engineering through a joint work of W.U.S.C and the Department of Student Placement in The Ministry of Education (Botswana).

During his stay in Canada he got to enjoy some of the best Botswana Hip Hop Music he had ever listened to through some free downloads on Facebook and twitter.

On his 3rd year listening to this music he took upon himself to launch an Online radio station (Elias FM) which he discovered through YouTube Tutorials on online radio stations and trial and error instances .He kept building this project which he later managed to focus it into making sure that more people got fully exposed to one of the genres that is really slept on from his country.

After absolutely discovering by mistake this new project, he was then faced with a challenge of now organising the music. So, he started listening and collecting more on daily basis but now with a purpose of creating something other people can enjoy .He also spent more time on the internet to learn more about managing a website/blogs and other Online radio Stations and kept doing that throughout building the project with doubts at times but never looked back up to this day.

ELIAS FM is the biggest goal he has ever set for himself to achieve after his Mineral Processing Engineering Degree. While pursuing his degrees he still find time to work on this project with the hope that one day it will be as he visualised it when watching YouTube Tutorials.